Click the image above to view an animation of Darwin's journey on the Beagle.

"Microevolution is what we witness in changes within species and populations. Macroevolution is grand scale evolution where species arise from other species and have common descent, which is something we can't witness but that scientists believe fossil evidence provides clues to."

Darwin was not the first or only scientist to theorize about evolution. 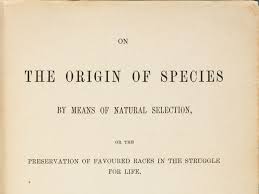 Click the title page above  to read Darwin's book. Includes links to his other publications.